Denton Youth and Community Project (DYCP), (formerly Denton Young People’s Project), was established in October 2000 following an extensive community-wide consultation exercise. The consultation was carried out by members of the Holy Spirit Church following a sustained period of anti-social behaviour issues resulting in damage to the church and church hall windows. It became clear early on that the young people felt there weren’t enough services in the area for them to engage in or activities to divert their energies. Surprisingly they also felt that there weren’t enough services for people of all ages. The name Denton Young people’s Project was selected to represent the fact that the idea for a programme of services for all ages, came from the young people.

Early services included Parent and Toddler sessions, a weekly Lunch Club, Dance and Fitness sessions and predominantly outreach and detached youth sessions. In the early days the organisation relied heavily on Volunteers with meetings being held in one of the volunteers’ homes. Funding was soon secured and a project manager and sessional staff were employed to support the volunteers in delivering a variety of activities including holiday activity programmes that included many of the traditional outdoor activities. Not long after those early meetings the project moved into the meeting room in the church hall where it operated from for nearly 10 years. The young people were very active in support of the project and before too long they had secured the funding to purchase their own 17 seat mini-bus. The young people have continued to work hard with facilitators to ensure that we have held the Investing in Children award consistently since 2009. In 2016 the Young People’s Management Committee administered the Denton Children and Young People’s Fund. A pot of £8,000 set aside by the Denton Ward Councillors to fund activities and the purchase of equipment by local youth groups. The Group devised an application process, reviewing and approving applications from a variety of sources that witnessed some innovative approaches to the delivery of opportunities to local groups of young people including the Newcastle All-Stars Steel Pan Band. 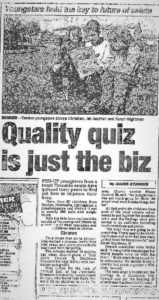 Following a successful second term of Lottery Funding via the Reaching Communities Fund and the desire to expand the programme to include more centre-based open access youth and play sessions the project relocated in 2012 to our current site in the Annexe on the former West Denton Association site off Hillhead Road. Interestingly the building had some years earlier, served as the Outer West Area Base for the Local Authority Youth Service prior to the closure of the service as a result of the austerity cuts imposed in 2000. It was at this point that the decision was also taken to re-brand the organisation and rename it as Denton Youth & Community Project; to better reflect the breadth and diversity of the services on offer and the fact that we work with residents aged 0-90+. The building provides us with three generous sized rooms, two that are used predominantly for general activities one fitted with a new kitchen area that serves both the Lunch Club and many of our other events and the third room which is set up and used for meetings and the delivery of training and seminars and is equipped with IT facilities and is open for hire.

In March 2013, as part of our partnership with N E Youth we acted as the pilot organisation for the roll-out of the Ambition Quality Mark and were the first of 3000 member clubs nationally to receive the award at Bronze Level. Then a year later in March 2014 we were successful in attaining the Silver Award. 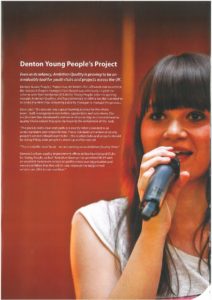 The organisation has a commitment to investing in local people and in a “Grow your Own” approach to staffing with several past members of staff having been employed following serving as volunteers. One of the young people who participated in the initial consultation process spent 8 years employed as a youth and community worker before moving on to bigger and better opportunities in Northumberland. The organisation has also taken on two former service users on an apprenticeship scheme in Work with Young People both of whom then went on to employed status following successful completion of their training. We currently have a couple of our senior youth members who are showing lots of promise and whom we are keeping a close eye on with a view to potentially offering them an apprenticeship opportunity in the future.

In the period between April 2010 and March 2022 the organisation has worked with 8,831 individuals. In the last 12 months, since the start of the relaxation of pandemic restrictions we have experienced an increase of 107 new individuals on the previous year. This increase clearly shows the need and growing demand for locally delivered services geared towards getting people back out of their homes, mixing with their peers and improving their physical and mental well-being. In that same period of April 2010 to March 2022 we delivered 5,082 individual sessions, each averaging two hours that then generated 55,729 contacts. Our oldest member is 97 years old and has been attending Lunch Club since its inception, a good number of our young people are second generation, having followed their parents into the organisation. In many cases we have worked with whole families comprising several siblings and extended family members. It is those close relationships fostered at the earliest opportunity that have contributed to the ongoing success of the organisation.